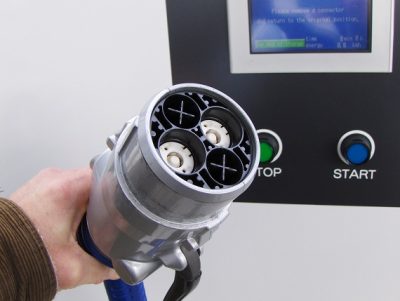 Japan – Nissan is looking to end the war of standard charging methods. In its fight against Tesla, they have gone to the other side.

During the 2010’s, electric cars were in a race. Charging systems were the dictator for most major car brands. Industry standard charging has three major competitors – CHAdeMO -which is a feature for many electric cars built in Japan, CCS which is the United States and Europe’s main form of charging and, of course, Tesla.

Well now that the decade has come to pass, major shifts withing the industry are taking place. Nissan is currently in the process of switching over their charging systems.

From the beginning Nissan has been the pivotal point for CHAdeMO, but since US and German electric car manufacturers are “surging”, they are now making the switch.

The nail in the coffin goes back to 2017. Hyundai motors made the switch to CCS in order to branch into the US markets. The combined forces of the US and Germany to install CCS charging systems was a power-move which would later separate EVs into specific charging stations.

Over the past decade, the CHAdeMO has been one of the strongest charging methods for the Japanese markets. It is so effective, that even during its release, it remains a better charging method than what CCS is today.

In order for Nissan to make major headway within the US market, they need to adapt to how the US is charging their vehicles. This is why their charging systems are changing despite their effectiveness.

With the US and Germany continuing with their own charging systems, many are making shifts to either compete or to adhere to these new standards.

The war is ending after a decade. The final results are currently tipping in favor of the US and German CCS charging method. As for the Tesla charging system, they are still ahead of the game and will be for along time.