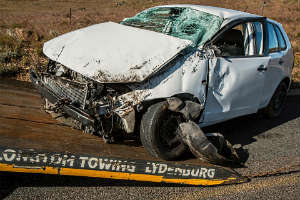 BAKERSFIELD, CA – The Bakersfield Police Department responded to a call for gunfire at a local intersection. An officer parked near the Coffee and Brimhall intersection heard gunfire and soon responded. While attempting to chase after the shooting suspect, a collision occurred.

At the intersection, before the accident occurred, an officer parked near the intersection heard gunshots. When the officer looked to the area sounding the shots, he noticed a black pickup barreling toward the intersection. The black Chevrolet pickup headed westbound off the Westside Parkway off-ramp. It was at this point, that the officer observing the car, began to chase after him. Meanwhile, the pickup had just run a red light.

Since the black Cheverlot had ignored the red light when he fled, he collided into a southbound vehicle. This white southbound vehicle was driven by an adult female. Thankfully, she was only sustained minor injuries.

The driver of the pickup, now identified as Javier Gonzales, wasn’t harmed from the collision. He emerged from the car and ran South. The officer then pursued him. With the assistance of a passerby, the officer captured Gonzales, age 22.

After searching the vehicle, officers found a loaded machine gun, and evidence that Gonzales recently fired the gun.

The Bakersfield Police Department discovered that the man originally shot off the on-ramp or the parkway.

Police investigated local hospitals to check if there were any injuries or gun-shot victims. Additionally, there were no calls injured citizens.

The Bakersfield Police Department put Gonzales into custody for a felony hit and run, various gang and gun affiliations and careless discharge of a firearm.