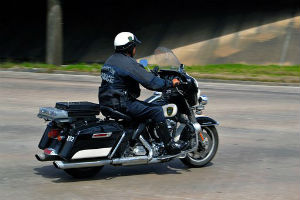 It was just a run of the mill day out on a California highway. The CHP was clocking passing cars, looking for speeders, and checking for any irregularities. Not much was happening then lo and behold a pickup truck hauling a massive load came chugging past. This oversized haul spilling out from the truck’s trailer definitely captured the officer’s attention.

Granted, the truck was traveling at reasonable highway speeds, however, according to the officer, it had an “extremely unsafe load.” Undoubtedly, his cargo looked like it could tumble over and threaten the safety of any passing cars. Consequently, the officer activated his sirens and set out to pull the truck over. He was able to do so without causing the pile of bags to topple over.

Once the driver was pulled over the officer inspected the cargo. He had no idea what to expect but whatever it was there was a lot of it. Mountains practically. But after careful examination the bags just contained empty cans and bottles – no suspicious contraband.

Still, the officer was stunned as he’d witnessed the load almost striking an overpass. It just barely averted disaster when going under it. Naturally, had the load been centimeters higher, it could have caused a huge accident. Cans and bottles would’ve spilled all over the road, jeopardizing the safety of everybody on the highway.

The incident occurred on Saturday on U.S. Route 50 at 34th street. This was reported in the Sacramento Area California Highway Patrol’s post.

The officer instructed the driver to stay parked on the shoulder until he could safely and appropriately rid himself of all the bags.

What do you guys think? Have you ever moved and had an outrageously stacked truck or car?