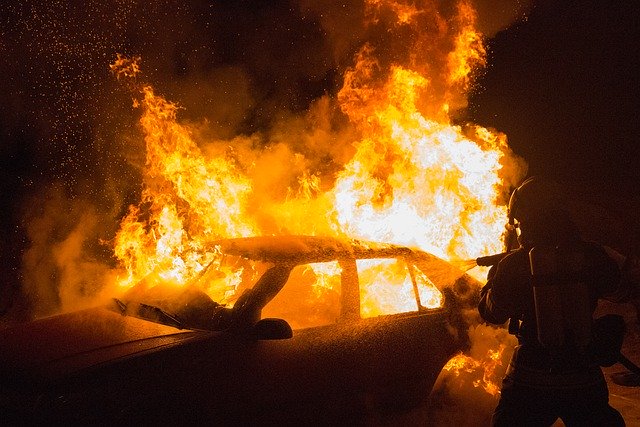 Bakersfield Protester Vonnesha Harris found her car burning where it was parked outside of her apartment earlier this month. She had attended a peaceful rally in the downtown area Sunday, May 31st. The next evening, a neighbor knocked on her door around 9 PM to inform her that her car was burning in the complex’s parking lot.

Once the fire was extinguished, Harris found racial slurs written on her car door. Some of the messaging revolved around the BLM movement. Basically the only word appropriate to reprint was “die.”

The Kern County Fire Department and Sheriff’s Office collaborated on an incident report. Currently, the KFCD continues to investigate possible arson. But without answers, Harris finds herself questioning whether it’s safe for her to return to protests. “I don’t know if I should feel threatened or not because I don’t know what this was, what this was intended to do.”

Harris did not believe that she was followed Sunday night. Thus, she worries about how much of her personal information the perpetrator has. She feels someone would need her address to know exactly which parking spot and car belonged to her. The intimate size of Bakersfield also concerns her. “(The fire) just made me realize that all of this is real. We see this happen in bigger cities and bigger states, and we’re just a little small town. Now we know that we have these types of people out here that will do this to us.”

The frightening event brought some good news as well, though. Many Bakersfield residents have reached out to show her support. Additionally, her friend created a GoFundMe to help replace the 2009 Chevy Impala. Harris has modestly said she does not expect much and would be grateful just for help affording a bus pass. “I don’t need anything extravagant.”

Fortunately, the GoFundMe page has collected over $8,000. So Harris will either be able to afford a car to get her to and from work, or she’ll be able to ride the bus for a while to come.

How Car Transport Can Help Your Business