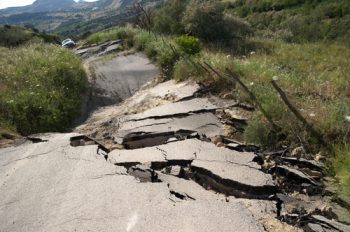 An earthquake with a hypothetical magnitude 7 on the San Francisco Bay region’s notorious Hayward fault, could kill hundreds, injuring thousands and cause $82 billion in property damage and business losses, according to a scenario created by a coalition of experts to help residents and policymakers prepare for and reduce disaster impacts.

The “HayWired” scenario was released Wednesday, the 112th anniversary of the Great Quake of 1906 that ravaged San Francisco.

“A scientifically realistic scenario is one way to learn about a large earthquake without the people of the bay region actually living through a disaster,” said a summary of the report, which was created by the U.S. Geological Survey and numerous partners as part of a campaign by the state Seismic Safety Commission and the California Business, Consumer Services and Housing Agency.

While the magnitude 7.8 earthquake of 1906 ruptured almost 300 miles (483 kilometers) of the mighty San Andreas fault, the HayWired scenario envisions a break of the Hayward fault, which lurks beneath cities on the east side of San Francisco Bay and has long been considered to potentially be the greatest seismic threat to the region of 7 million people.

The scenario’s epicenter is under Oakland and the break extends 52 miles (about 84 kilometers) along the fault, north to Richmond and south to Fremont. The movement is so huge that the offset of one side of the fault to the other is as much as 6 feet (1.8 meters) and shaking could cause landslides in hills and mountains.

Such a quake would be a danger to about 2 million buildings around San Francisco Bay, including 300 with foundations directly atop the fault, according to the report.

All the region’s water supply systems could be affected, especially in the East Bay, where outages could last six weeks to six months.

With damage from shaking and fire combined, an estimated 152,000 households — about 411,000 people — could be displaced.

The report contends that for a small increase in cost, construction of buildings to more stringent standards could allow 95 percent of the region’s population to remain in their homes after the envisioned earthquake.